How We Raise Chickens On the Ranch🐓

This year is the first year we have ever raised the chickens on our ranch. There were two main reasons for that: We didn't have enough manpower to raise them, and then we were concerned that our climate here on the ranch was too variable to raise chickens.

We decided to give it a try this year since we hired a new team member, and he was willing to do the daily chores while Brian built the infrastructure and oversaw the management of the chickens.

The first step to raising the chickens is receiving them through the USPS mail and starting them in the brooder.

When we first get the chicks, they need to be at 90 degrees for the first several weeks of their life until they develop their down feathers and can handle daily temperature swings.

The brooder is just a big car-port with a large Ohio brooder with heat lamps underneath that the chicks can go under and get warm. They walk outside the brooder to get feed and water.

Once they are four weeks old, they no longer need the heat source, have enough feathers and are ready for outdoor life. 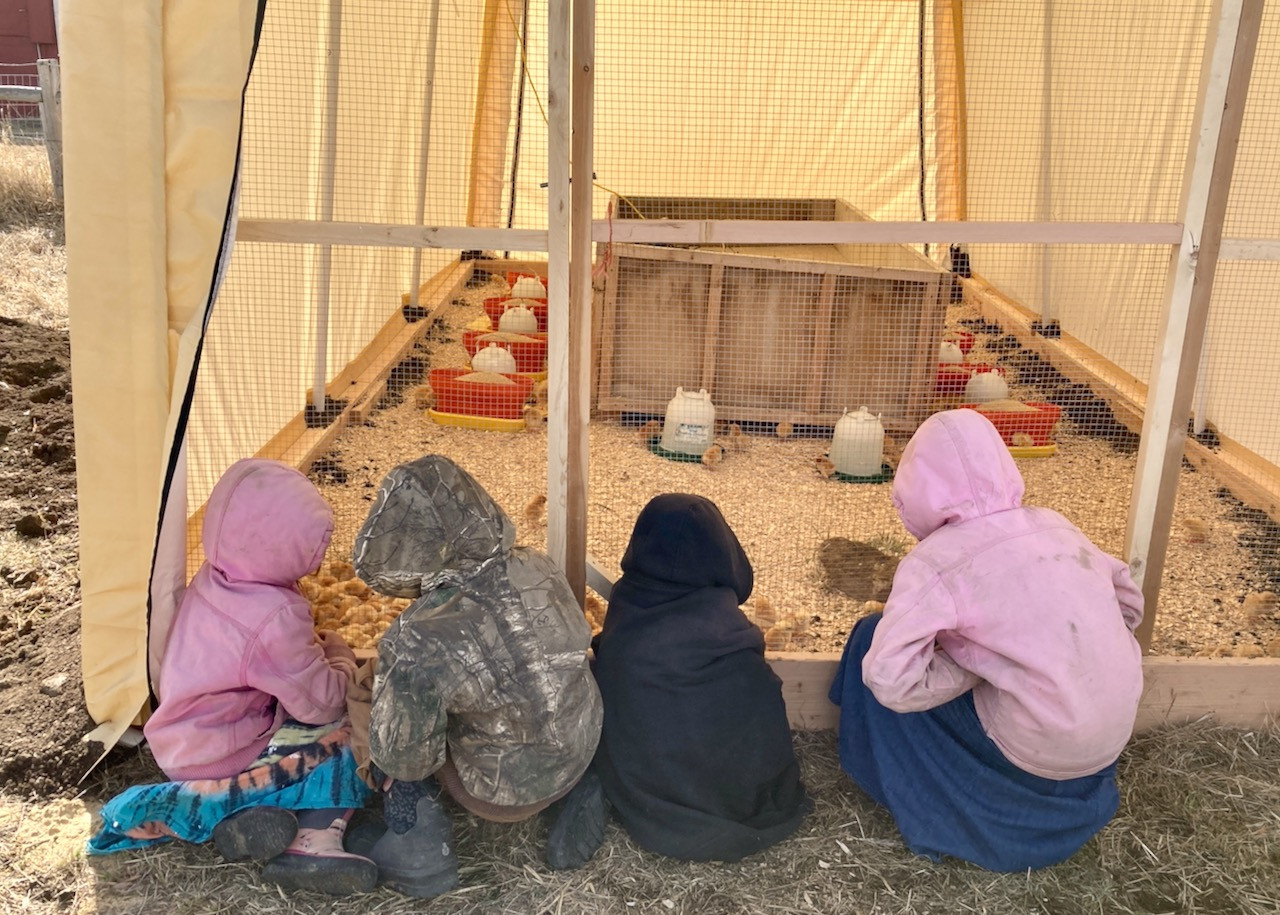 The week we move the chicks (teenagers) out onto pasture, we watch the forecast to pick the best day to move them out. That transition outside can be quite a shock on their system, so we want it to be as warm and nice of weather as possible before making a move-out.

We gather the teenage chicks into crates and quickly move them out into their new mobile chicken houses.

The reason why we put them in portable houses is mainly due to predator issues. Chickens are the most defenseless animal out there, and all predators know that. We have tried cheaper methods (electric fences, lighter houses, etc.) in the past, but predators always seemed to find a way to get to the chickens. Since building these larger houses, we have had zero death loss due to predators. We also have livestock guardian dogs that roam around to keep predators at bay. 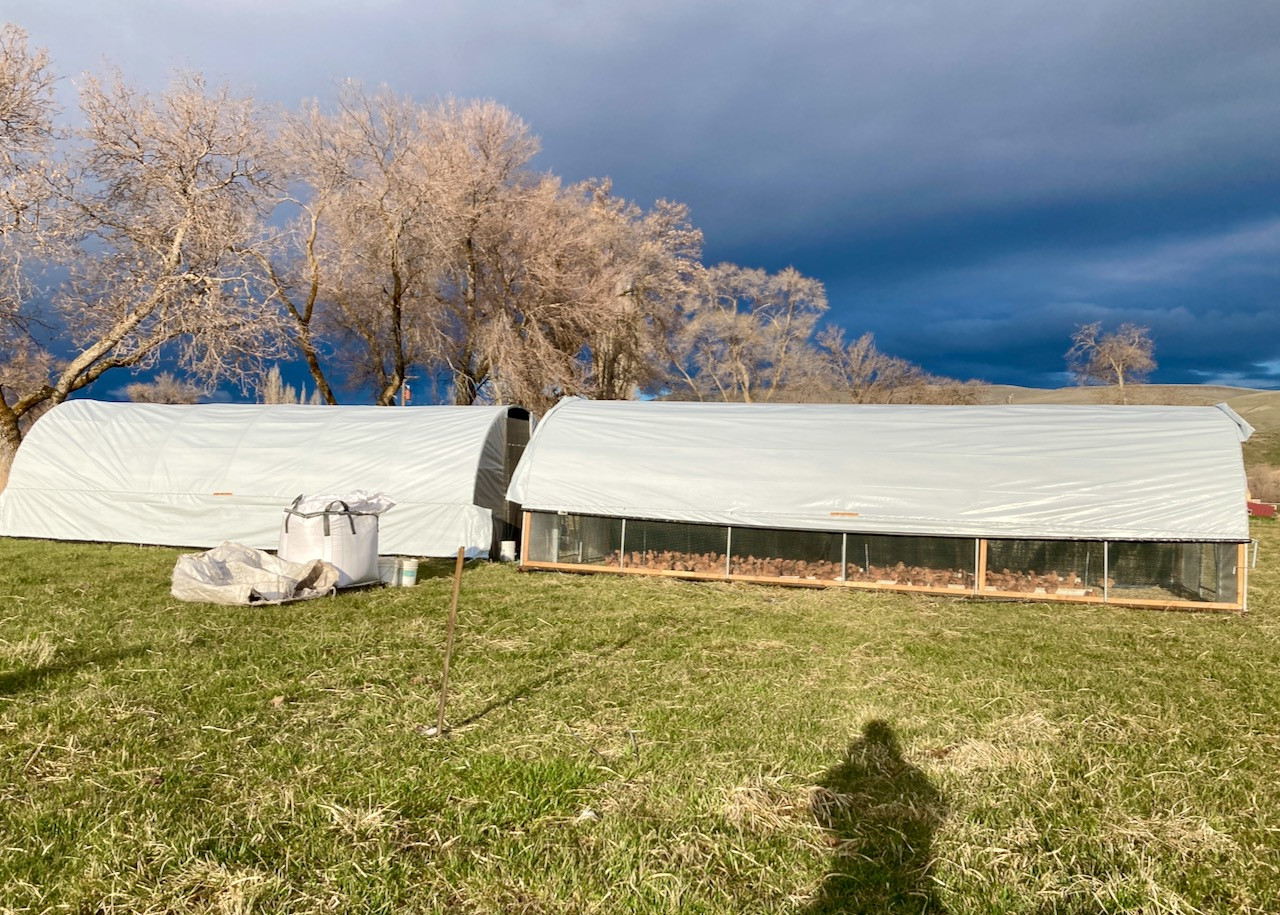 Once the chicks are nicely settled into their new home, they get moved to fresh pasture every morning. A winch system is used to move the houses. We then go in and put fresh food into their feeders. They have automatic waterers in the houses that provide live-well water.

Behind the chicken houses, they leave a fresh trail of chicken manure, the highest quality fertilizer available. In the picture below, it can be seen how quickly the grass shoots up a few days after the houses have been over the pasture! 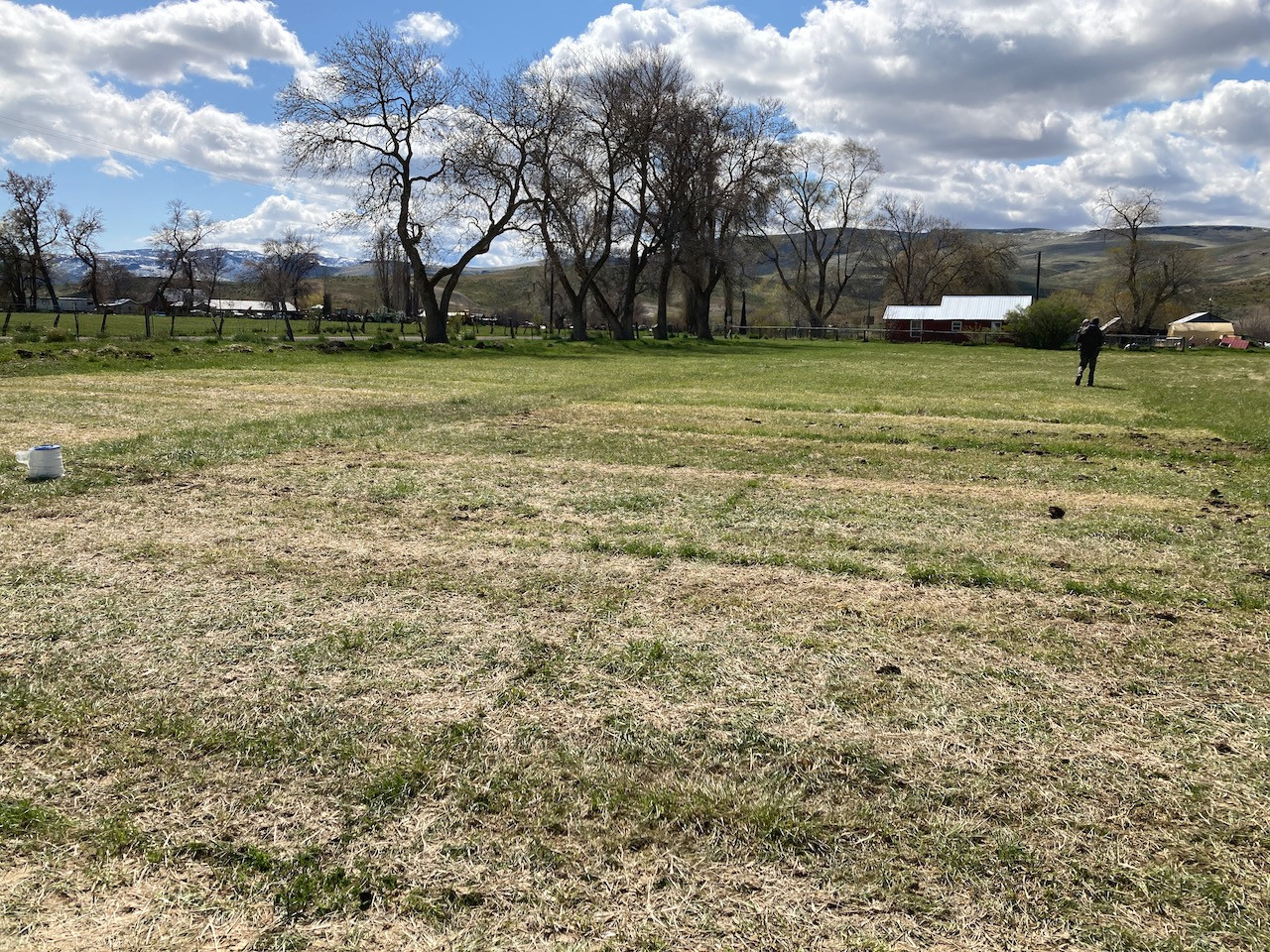 Depending on the breed of chicken, they are big enough for processing anywhere from 8-12 weeks.

This first batch of chickens we did was a slightly slower growing breed, so they were ready for processing between 10-12 weeks. The easiest way to catch chickens is in the middle of the night when they sleep. Chickens have poor eye-site and is much lower stress to capture in the middle of the night. We also do this while temperatures are nice and cool to reduce the stress on the chickens. 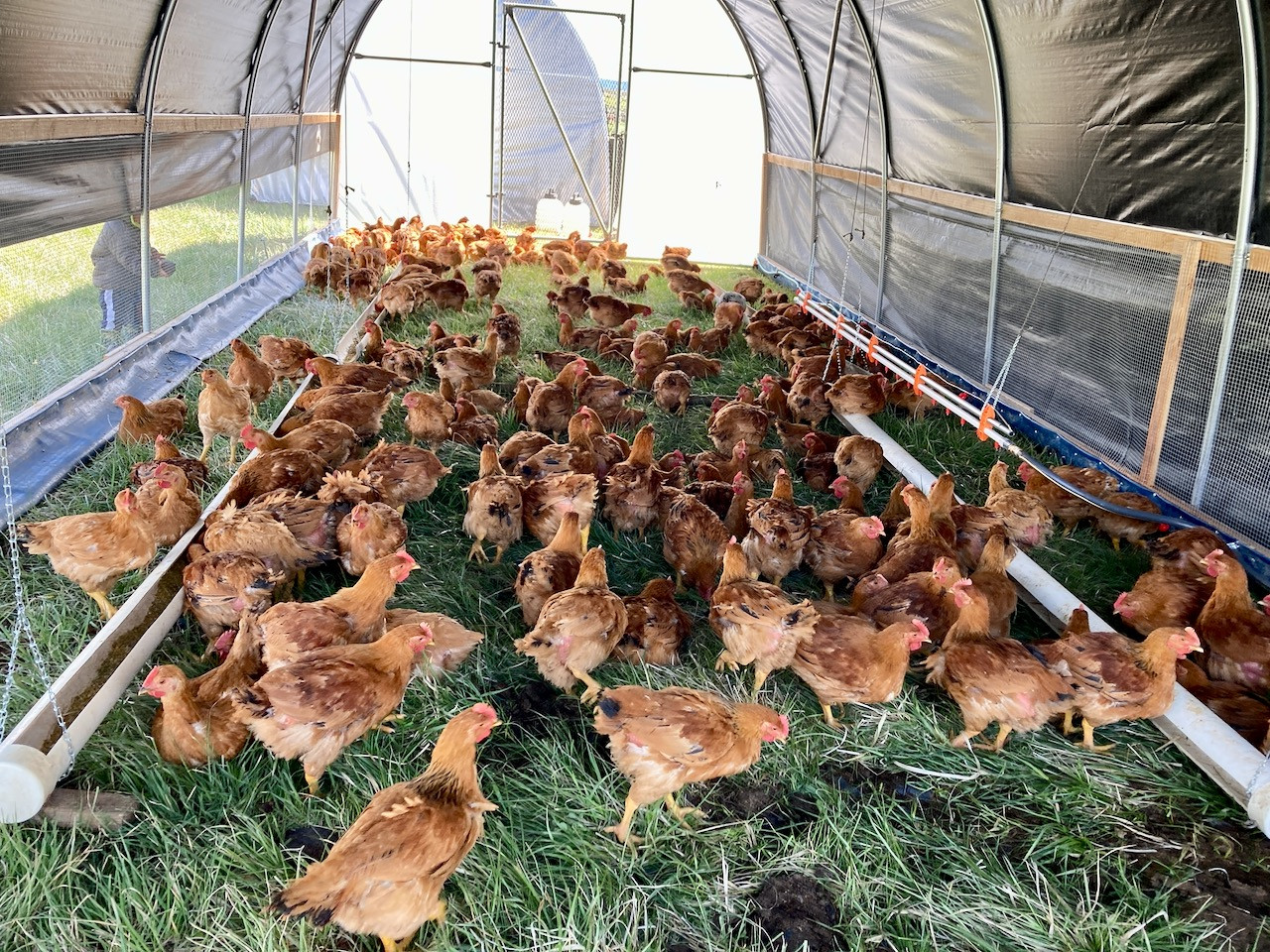 This picture was taken about two weeks before processing the first batch of chickens.

Bringing the chickens up to the ranch this year hasn't been without many trials, but we are now confident we can raise the chickens here and are so glad to have our eyes on the whole process from start to finish.. 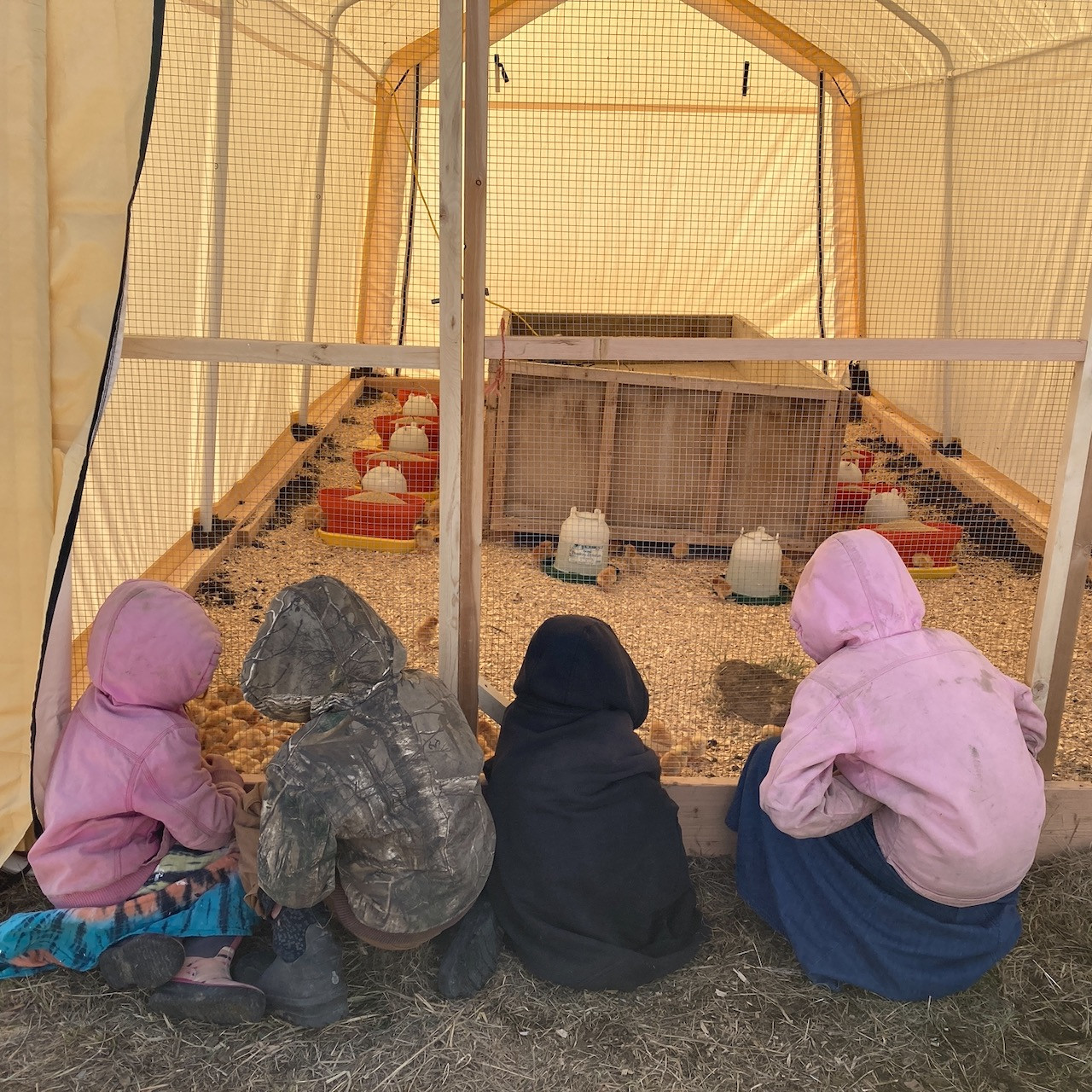 Which Is Better Organic or Grassfed? 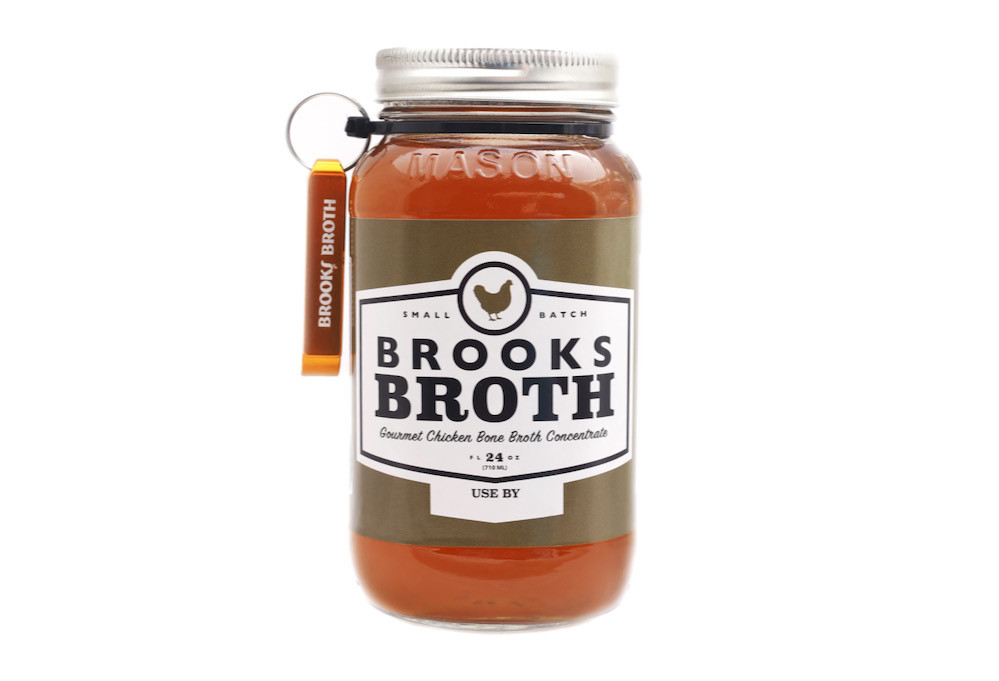